GRAMMY & Ivor Novello award-winning songwriter & producer, Eliot Kennedy, is the first celebrity judge to be announced for this year’s Worksop’s Got Talent.

In a career spanning 3 decades & with total record sales of over 80 million worldwide, Eliot has worked with some of the biggest names in music, including Take That, The Spice Girls, Celine Dion, Aretha Franklin, Mary J Blige, Donny Osmond, Bryan Adams, Boyzone, S Club 7 & many more.

Eliot has had 20 international #1 singles, with his biggest hits including the global #1 singles, ‘Everything Changes’ (for Take That), ‘Say You’ll Be There’ (for The Spice Girls) & ‘Bring It All Back’ (for S Club 7).

Eliot was also the co-writer of the score for the hit Broadway musical, Finding Neverland, alongside Gary Barlow. In 2011, Eliot joined ‘The X Factor’ & worked alongside head judge, Gary Barlow, in nurturing that series’ talent.

As well as winning a GRAMMY for writing ‘Never Gonna Break My Faith’, sung by Aretha Franklin & Mary J Blige, Eliot has also won an Ivor Novello for writing ‘Picture Of You’ for Boyzone. Eliot has been nominated for awards at the Golden Globes & Critics Choice. This year’s show is a Movie special, with our 12 finalists performing Movie-inspired routines. Eliot has contributed songs to a number of movie soundtracks, including ‘Spice World’ & ‘The Princess Diaries’.

On joining Worksop’s Got Talent, Sheffield-based Eliot says: “I’m always excited about new talent & even more so from where I live. I can’t wait to see the artists!”

Event organiser, James Clarke, says: “I have wanted to work with Eliot for many years, so to be working together on this year’s show is a dream come true! I cannot wait for our finalists to have the opportunity to perform in front of an industry expert & the fact that he has worked on several movie soundtracks fits perfectly with this year’s theme.”

Worksop’s Got Talent will be hosted by ‘Coronation Street’ actress, Kym Marsh & model & TV personality, Sam Reece for a 2nd year running. Further announcements will be made on who else will be joining Eliot on the judging panel in due course, on our social media pages: @WorksopsGotTalent on Facebook & Instagram & @WorksopTalent on Twitter.

Over the past 3 years, Worksop’s Got Talent has raised over £22,000 for eye charity, Retina UK, won 2 awards, sold out 3 times (with 700 guests every year), attracted big celebrity guests & earned the event organiser invitations to Buckingham Palace & the House of Commons. 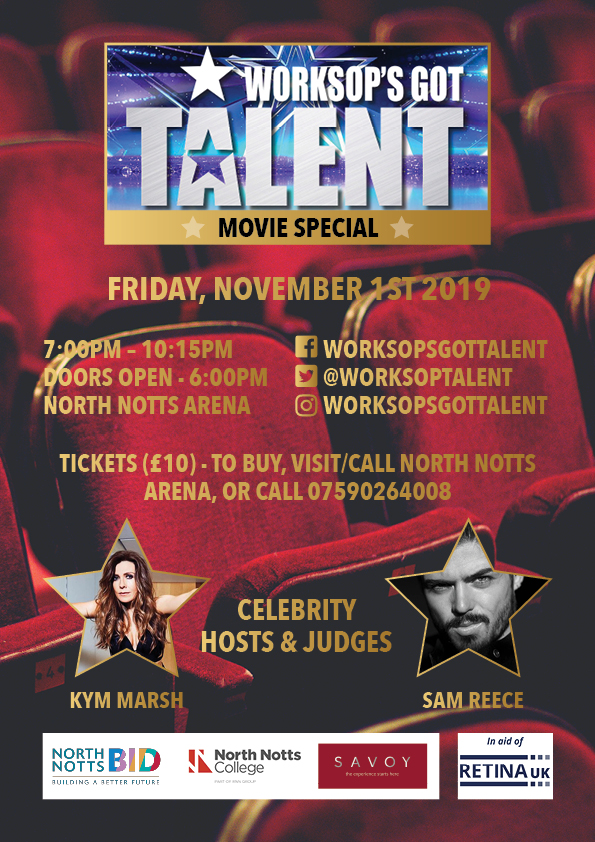